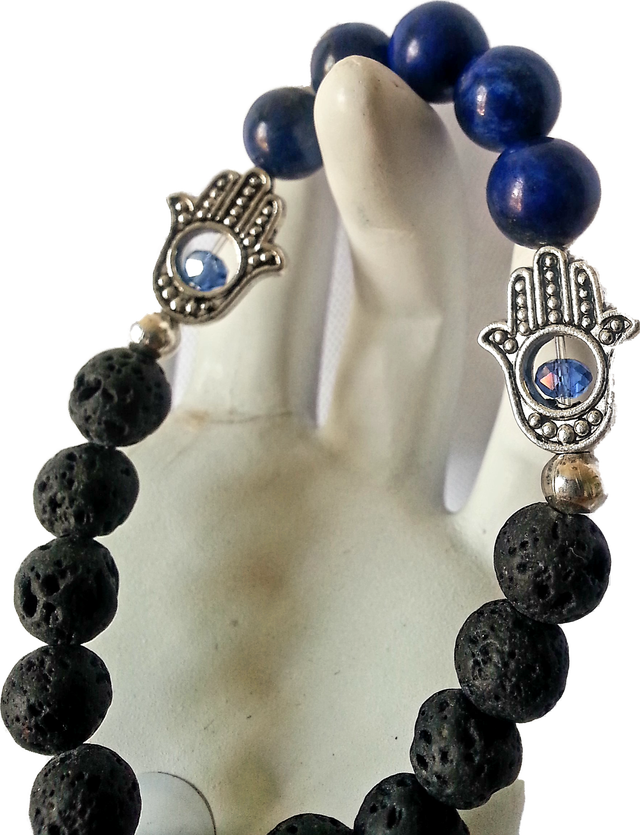 Lava rock and Lapis Lazuli stone, joined together with 2 silver Hamsa. Various wrist sizes available. Note: The eye of the hamsa may be a crystal, lapis stone, or lava rock.

I suggest applying just a drop or two of essential oil to the black lava beads. The scent will last a day if not more. You can use any of your favorite essential oils. The rocks are mounted on a sturdy stretch cording.

Add to Cart
The Hamsa Hand is an ancient Middle Eastern amulet symbolizing the Hand of God. In all faiths it is a protective sign. It brings its owner happiness, luck, health, and good fortune.
Lava rock is easily the oldest and most frequently found stone in world; hence, it’s used by nearly an endless amount of cultures. Lava stone literally comes from the core of the earth- fiery brimstone that bubbles to the surface and cools.
Once the stone is cool, it becomes porous and black, creating the beautiful black color so many have come to love. This is known as basalt, and can mostly be found in the ocean.
Lava rock doesn’t really have the “look” of something that is healing; but for centuries it has been used to do exactly that. When thinking of lava rock, it’s important to keep in mind that its origin plays a key role in its energetic qualities.
• Emotional- Since lava is known for its grounding qualities, it’s wonderful for calming the emotions. In fact, the quality of fire springs from the ground, so in terms of healing gems, this lends itself to a calming- but intense- energy. Because it comes from raw energy, it’s considered to be a stone of rebirth and shedding unneeded layers of emotional attachment.
• Spiritual- Lava rock are fantastic for stabilizing and grounding the root chakra. This is because of the strong connection to the earth and its creation within the center of Earth. In folk remedies, it was also given to soldiers to help them remain calm during battle.
Typically, lava stone (like most healing gemstones) is recommended to be worn in close contact with the skin, if not directly on the skin. This is because the barrier for absorption is not blocked by anything.  It gives easy access for the energy to flow clearly, and usually malas and bracelets are used for this purpose. However, lava stone can also be used in rooms in order to help with emotional clearing, or to keep things energetically balanced.
Made from a combination of minerals, including Lazurite, Calcite, and Pyrite, Lapis Lazuli is said to have been in existence since the birth of time, and was used by ancient Hebrews on ceremonial robes.
Lapis Lazuli reminds us of the power of the spoken word and is one of the best stones to use when opening and balancing the Throat Chakra. Lapis Lazuli helps to foster full verbal expression, and clears problems caused by “swallowing your tongue”. Lapis encourages clear, truthful expression when sharing information with others, including an easier voicing/communication of anger.
A Third Eye Chakra opener, Lapis Lazuli connects the physical and celestial kingdoms. Deeply peaceful, Lapis provides wisdom into mystical realms and connection with spiritual guardians. Lapis Lazuli can be a key to spiritual attainment. Lapis also protects against psychic attack, shielding negative energy and returning any negative vibrations to their source. Lapis Lazuli will enhance dream work and spiritual journeying.
Physically, Lapis Lazuli helps with the immune system, thyroid and nervous system. It can alleviate headaches, migraines, fevers and pain.